If you need a linear heat detection solution which is approved to EN54, then Signaline HD is more than just a great option.

In fact, it is the only option currently on the market that is approved for both addressable and conventional fire systems.

An electronic controller connected to the Signaline HD cable monitors changes in temperature by continually measuring the electrical resistance between the cable’s metallic core and its outer braiding. If a sufficiently high change in temperature is detected, then the controller triggers an alarm.

Our Signaline HD and SKM Controller range is approved by VdS to EN54 part 5 which means any fire system with Signaline HD installed will meet the same standards as a traditional ‘spot’ type heat detector.

This means a Signaline HD linear heat detection system can replace any traditional spot detector system and can be installed in exactly the same way.

Linear heat detection cable is also less susceptible to environmental conditions than spot type detectors making it perfect for farm buildings, car parks and a variety of other applications.

For particularly harsh or chemical environments, our Signaline HD-R cable is nylon coated and – rest assured – approved to EN54 as well. 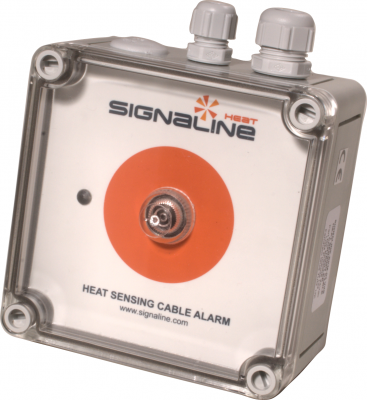 Did you know that Signaline offers the only EN54 approved analogue linear heat detection system in the world which is loop powered and addressable?

The controller has its own addressing dip switch and is powered directly from the loop. This eliminates the need for loop interfaces or additional power supplies and provides significant cost savings.

Using a Signaline SKM-95 Controller is an ideal way of integrating linear heat detection with large BMS fire systems, such as in a multi-storey car park installation.

Combining the SKM-95 Controller with Signaline HD analogue cable allows you to integrate this part of your fire detection system onto the same loop as other areas of your network. In short, it’s a very efficient and practical form of fire detection.

The SKM-95 Controller is also IP65 rated and comes with an End of Line Unit, making installation extremely simple and efficient.

If you would like to make an enquiry about this product please email: sales@lgmproducts.com.